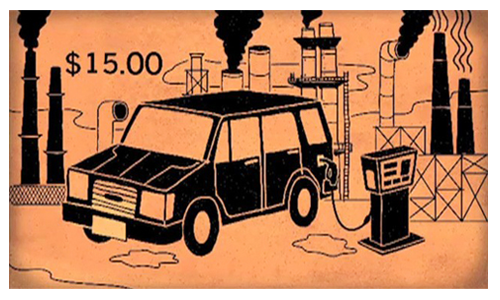 $15 PER GALLON GAS? HERE’S WHAT WE DON’T PAY AT THE PUMP!
The Price of Gas is an animated short that has been produced by The Center for Investigative Reporting. Their purpose is to give the average American consumer, a better understanding of the hidden costs of fuel. (Video featured below).

The video mentions that “a single driver creates 10,000 pounds of greenhouse gas pollution a year. It takes one acre of forest to absorb that pollution.”

This can become a serious financial burden, one that the residents of California learned first hand. ”In 2008, a study commissioned by CSU Fullerton uncovered “that the cost of air pollution for the greater Los Angeles region adds up to more than $1,250 per person per year.”

To combat the ill effects of excessive pollution, Californians brought in the Global Warming Solutions Act, the goal of which is “to reduce greenhouse gas pollution to 1990 levels by the year 2020.”
According to the Environmental Protection Agency, “from 1990 to 2010, these regulations have prevented “23,000 Americans from dying prematurely ... avert(ed) over 1,700,000 incidences of asthma attacks and aggravation of chronic asthma.” The EPA goes on to state that "it also prevented more than 4.1 million lost workdays due to pollution-related illnesses.”

Other factors to consider when thinking about the external and monetary cost is the current turmoil in the Middle East and environmental problems like oil spills.