A Day To Move Beyond Fossil Fuel 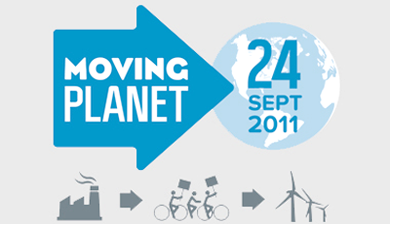 March 24th will usher in the third annual Moving Planet event. This is an international affair where concerned people from all across the globe unite for a cause that affects us all.

Communities from the United States, Bangladesh, Cameroon, and Indonesia, to name only a few, will put their demands for climate action into motion by marching, biking, skating, scooting, or with other means of sustainable movement in a symbolic gesture to convince humanity to go beyond fossil fuels. The Moving Planet Event is so widespread, there is probably one near you. Participants will also attempt to draw attention to this cause politically, by bringing forth powerful demands to our leaders, which is especially vital in places where governments are stalling on climate action despite the overwhelming urgency that has communicated by scientists.

Moving Planet is a collaborative effort of many organizations, movements, and individuals, including; 350.org, Sierra Club, Greenpeace, Oxfam, Global Exchange, League of American Bicyclists and many more.