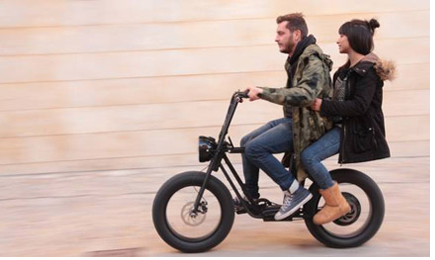 Despite all the times we’ve looked out our car windows to see some cyclist cut right past the traffic holding us up and draining our gas tanks, most people still don’t consider bikes a convenient alternative.

Perhaps it’s the notion all that pedaling would leave us sweaty and exhausted by the time we reach our destination. But that isn’t the case — at least not for customers of Ecruizers in the Sierra Madre and UrbanScooters of South Pasadena, two local businesses selling street-legal electric scooters and bikes.

Ecruizers offers several low-sweat modes of two-wheeled transport, some with the look and feel of scooters and others that at first glance would appear to be traditional bicycles. In fact, they’re so similar that you don’t need a special license or insurance to operate one, and they can go anywhere traditional bicycles can: roads, bike lanes, college campuses and even on a Metro bike rack.

The difference between old-school bicycles and Ecruizers are that these electric bikes, which range in price from $800 to $1,100 new, are much easier to ride. They’re hybrids that run on two sources of power, pedaling and electricity.

When the detachable electric power box is charged, the bike can run entirely without pedaling, but the more you pedal the longer the battery power will last. Ride the bike to work, charge the power strip at the office, and by the end of the day, it’ll be ready to go again.

“Unlike when you sit in traffic and get stressed in your car when you ride one and get to work you’ll have a smile on your face,” said Ecruizer owner Tony Cummins, who rides eight miles daily from his home to the Ecruizers store.

If you already have a favorite pair of wheels, an electric bike kit from Urban Scooters would be a great option. The DIY installation kit includes a motor, controller, and batteries — all you need to turn exercise equipment into viable commuter transportation. UrbanScooters, a Web-based business (urbanscooters.com), offers electric scooters ranging from $400 to $1,000, but for these, you’ll need to be over 16 and have a license.

Before opening Ecruizers, Cummins and his wife Nina lived in Quingdao, China, where they couldn’t help noticing electric bikes and scooters everywhere they turned. Whole families would commute to work and school on the scooter — dad driving, mom riding behind him and their kid standing behind the handlebars. So, they thought, why wouldn’t it work here? As it turns out, consumer attitudes are the biggest hurdle.

“The US is a huge car culture and it is going to take time for people to get used to other forms of transportation,” said Cummins, who raises awareness by giving away electric bikes at schools and charity events. “The biggest issue is that we don’t have a lot of bikes out on the road yet.”

But if pedaling isn’t your thing, Ecruizers and UrbanScooters offer electric scooters that go as fast as 20 miles per hour and cost under 2 cents per mile to operate, unlike cars which — with gas, insurance and maintenance — cost more than 50 cents per mile. It’s kinda like getting 1,500 miles per gallon.

“One of the main reasons I’m involved in selling these electric bikes and scooters is because I care about the environment. I’d like to see us move away from using vehicles run by gasoline,” said UrbanScooters founder Frank Minero, also head of a Pasadena global warming awareness group.

As environmental consciousness increases and cities become more and more bicycle-friendly, more pedal-pushers are sure to hit the road. Already a city full of bike lanes and trails, Pasadena will host a six-day Bike Week in May (see The Green Agenda) to focus on two-wheeled lifestyle and entertainment.

“When gas prices were really high last summer, our sales were through the roof,” said Minero. “As people become more aware of the negative effects cars have on the environment, they will see how electric vehicles are the answer.”