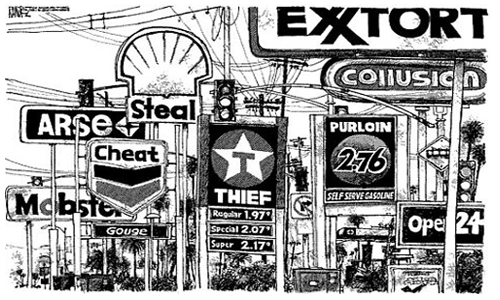 BIG OIL CLINGS TO TAX BREAKS WHILE HOARDING BILLIONS
As you all know, President Barack Obama has unveiled his plan to reduce the deficit recently. It includes measures that would help “reduce the deficit by $4 trillion over the next 12 years, including raising $1.5 trillion by closing special interest loopholes and other revenue raisers.”

The Oil and Gas Industry, of course, are not excluded from this plan. Procedures have been set in motion to close loopholes that benefit these Corporate Giants in the time frame of the next ten years, and they are not happy; “the American Petroleum Institute, or API, the oil industry’s lobbying muscle, quickly claimed that “the Administration plan would hurt jobs and investment.”

But is this claim even true? The data seems to suggest it is far from it.

BP, Chevron, ConocoPhilips, ExxonMobil, and Shell—have ample financial resources that dwarf the value of these tax breaks. These companies enjoy billions in cash reserves, made nearly $1 trillion in profits over the past decade, and at least one company (ExxonMobil) pays a lower effective tax rate than the average American family.

This isn't even the tip of the iceberg. After the release of The Federal Reserve Report last month, it has become exceedingly apparent that Big Oil's claims are plain wrong.

In fact, a CAP analysis of company Security and Exchange Commission filings determined that the three largest American oil companies—Chevron, ConocoPhillips, and ExxonMobil—had $27 billion in cash or equivalent assets as of midyear 2011.

BP and Shell, the two largest foreign oil companies that operate in the United States, had combined cash reserves of nearly $32 billion at the end of last year (the latest data available). Added together, these five companies are sitting on cash resources of $59 billion, which is 30 times more than the estimated $2 billion in annual tax breaks that these companies receive.