‘Revenge Of The Electric Car’ Opens This Weekend 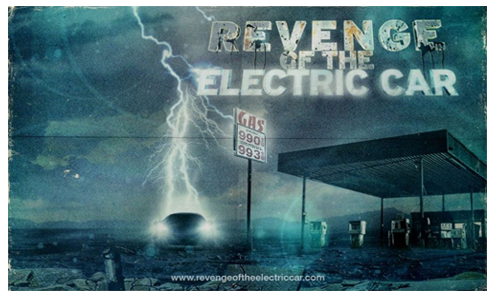 Do you remember the award winning documentary, Who Killed The Electric Car? Well, just in time for Halloween, electric cars have risen from the dead with a sequel to WKTEC opening this weekend called Revenge Of The Electric Car.
In Revenge of the Electric Car, Director Chris Paine peels back the curtain of big Automobile Companies like Nissan, General Motors, and Tesla Motors to give audiences a peek into a new era that is marked by “the global resurgence of electric cars.”

Thanks in part to the undying will of some very determined folk, including “CEO and President of Renault and Nissan Carlos Ghosn, CEO of Tesla Motors Elon Musk, Former Vice Chairman of GM Bob Lutz” and everyone’s favorite regular Joe, Greg “Gadget” Abbot, the Electric Car has been brought back from the dead, and is ready to take on the world!

This film not only documents the resurgence of a movement, it’s also immensely entertaining and has received an endless flood of positive reviews.

“Riveting ... highly entertaining. With unprecedented insider access, Paine presents a film that is less an environmental jeremiad that a portrait of the automotive industry as it seeks to catch up with the 21st century. (Revenge) boasts the richest cast of quirky, compelling characters at Tribeca.”
—JOHN LOPEZ, VANITY FAIR

"One of the best films at Tribeca ... this follow-up to 2006's Who Killed the Electric Car? is distinguished by its unguarded access to GM's Bob Lutz, Nissan's Carlos Ghosn, and Tesla's Elon Musk — three colorful super-villains who might just save the planet"
—JULIAN SANCTON, ESQUIRE

This documentary is not merely for the avid car enthusiast, it has something for everyone. If you are concerned about gas prices, alternatives to foreign oil, the degradation of our environment, or are just curious, The revenge of the Electric Car is a must see.

The Revenge of the Electric Car opens this weekend in the following locations:

And don't forget to check for future dates and locations.

Special Events at this Weekend's showings in Los Angeles and New York: