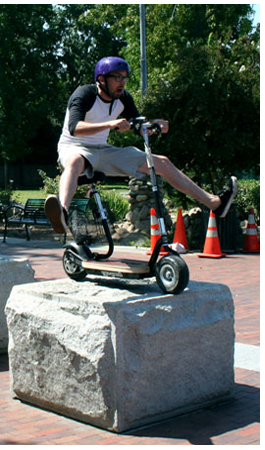 PASADENA - David Carlos used to drive eight miles through heavy traffic congestion to get to work each day.

And when he did, the 23-year-old Long Beach resident would often look longingly at the serene river trail that paralleled his freeway route, wishing he could take that way instead.

These days, that's what he does.

Two months ago, Carlos bought an electric scooter from UrbanScooters.com in South Pasadena. And his stress level has gone down - exponentially.

"Gas prices were a big part of it," he said. "And this is a lot more fun. Now I look over at the freeway and thank God I'm not on it."

"That's the interesting thing," he said. "We started off selling primarily to kids. But over the past few years - and even more, so recently - there's been a switch to adults buying them for themselves for the commute as an alternative to getting to work."

"They're doing this because of gas prices - and because they want to reduce their carbon footprint," he said.

The scooter is powered by four 24-volt, sealed lead-acid batteries and can carry up to 400 pounds, according to the manufacturer's specs.

"Roughly, it takes about four hours to charge," Minero said. "Some people will drive them to the Gold Line station and then take the train the rest of the way to work."

Laws regarding the use of electric scooters are still being formulated, he said.

"To operate one in California you have to be 16 or older and have a driver's license," he said. "But the laws vary from state to state."

UrbanScooters will soon be selling electric bike kits as well. The kits can be attached to any bicycle to give the rider an electric "power assist."

"A good kit will run $500 to $1,000, but they pay for themselves pretty quickly because you're saving on gas," Minero said. "The electric motor is built into the hub of the rear wheel and you have batteries in your rear saddlebags."

On Friday, the average price for a gallon of regular, unleaded gas in the Los Angeles/Long Beach area was $3.77 per gallon, up nearly a dollar from $2.84 a year earlier, according to the Automobile Club of Southern California.