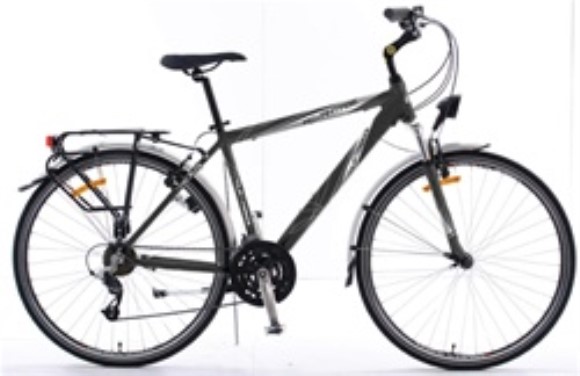 Advantage Elite is a feature packed machine that is perfect for the serious commuter. The light alloy frame combined makes hills a breeze.

In early 20th century France, anyone envisaging a near-2,500-km-long cycle race across the country would have been widely viewed as unhinged. But that didn’t stop Géo Lefèvre, a journalist with L’Auto magazine at the time, from proceeding with his inspired plan.

His editor, Henri Desgrange, was bold enough to believe in the idea and to throw his backing behind the Tour de France.
And so it was that, on 1 July 1903, sixty pioneers set out on their bicycles from Montgeron. After six mammoth stages (Nantes - Paris, 471 km!), only 21 “routiers”, led by Maurice Garin, arrived at the end of this first epic.

Having provoked a mixture of astonishment and admiration, le Tour soon won over the sporting public and the roadside crowds swelled. The French people took to their hearts this unusual event which placed their towns, their countryside and, since 1910, even their mountains, in the spotlight.

Le Tour has always moved with the times. Like France as a whole, it benefited from the introduction of paid holidays from 1936. It has lived through wars, and then savoured the “trente glorieuses” period of economic prosperity while enjoying the heydays of Coppi, Bobet, Anquetil and Poulidor.

It has opened itself up to foreign countries with the onset of globalisation and now finds itself at the forefront of the debate on the malaise afflicting world sport in general. Over a hundred years after its inception, le Tour continues to gain strength from its experience.