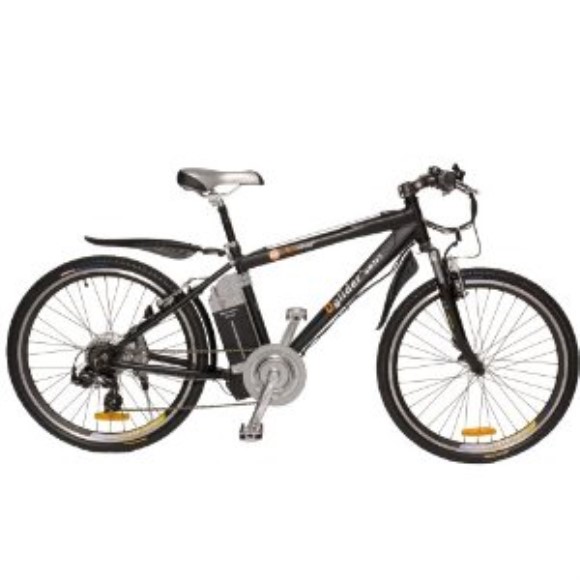 The most popular form of transportation in the world is the bicycle, but few Americans take it seriously as a car alternative. Enter the Urban Mover Glider electric mountain bike, a battery-powered bicycle that can go farther and faster than a conventional bike with little effort. The Glider is outfitted with such traditional bike features as a lightweight, double heat-treated alloy frame, a Shimano Tourney gear set and shifter, and alloy wheel rims with stainless-steel spokes. It's the advanced Panasonic lithium battery and powerful UM brushless hub motor that really steal the show, however. The electric assistance makes it easy to pop into town for groceries or commute across the city, because the bike's sensor detects how hard you're riding and instantly matches the effort. Even a casual peddler can maintain speeds of 12 to 18 miles per hour with a minimum of effort. And when you stop peddling, the power is interrupted immediately so that you're always in total control. It's the perfect bike for commuters tired of facing traffic jams day in and day out or dealing with the spiraling costs of car ownership.

The Glider offers a real alternative to the social and fiscal costs of driving. Maintenance and fuel costs are minimal, with the electricity for charging the fuel checking in at about 10 cents for every 12 to 18 miles (the charger works in standard outlets and charges in less than six hours). In addition, the bike effectively flattens hills by increasing your average speed on the approach, making it simple to climb hills of up to 12 percent without collapsing in exhaustion. And although it won't keep you as fit as a conventional bike, the Glider will get you outdoors and moving. Perhaps the most popular feature, however, is the emission-free design, which is far cleaner and greener than carbon-based transportation. And if you charge the bike using power from a wind generator or solar panels, you'll be even greener. All that plus it doesn't smell or rattle, is completely silent, and is easy to maintain.